Brisket is the best. I love it and would eat it every day if I wouldn't die from heart failure within a month..  but occasionally I gotta do it, and with a company picnic coming up, I wanted to pull out the big guns. But I also knew that if I spent the time doing a brisket for the picnic that a small part of me would be sad that I wouldn't have the week of brisket snacking that I usually get after cooking a brisket... 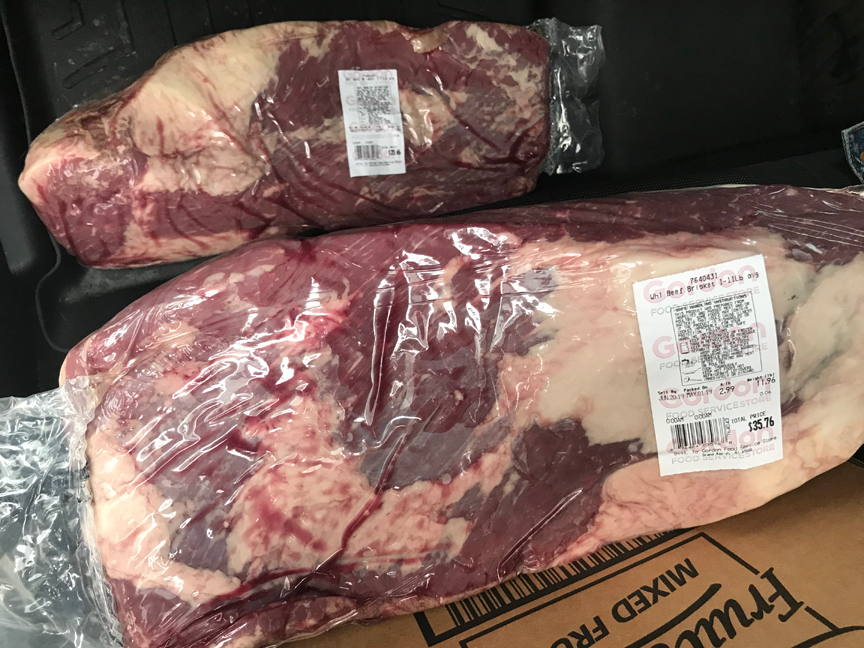 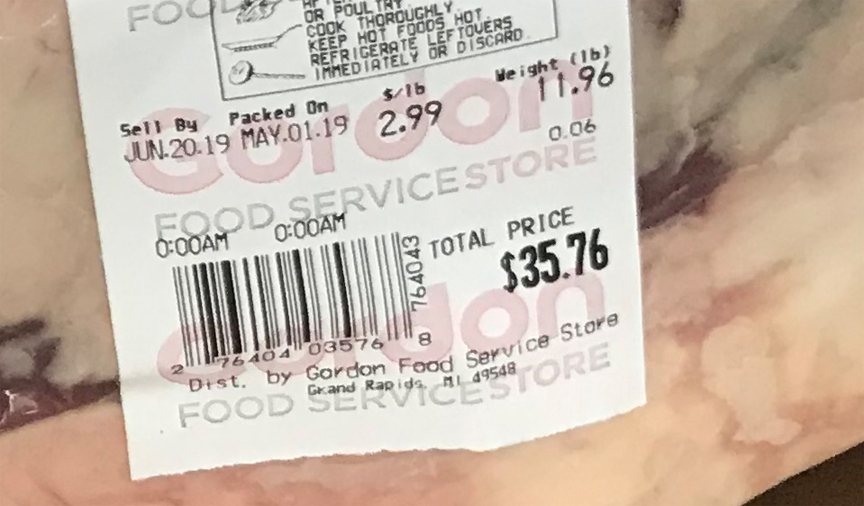 Both briskets were about the same size too -  and after a little work, the trimming was done! 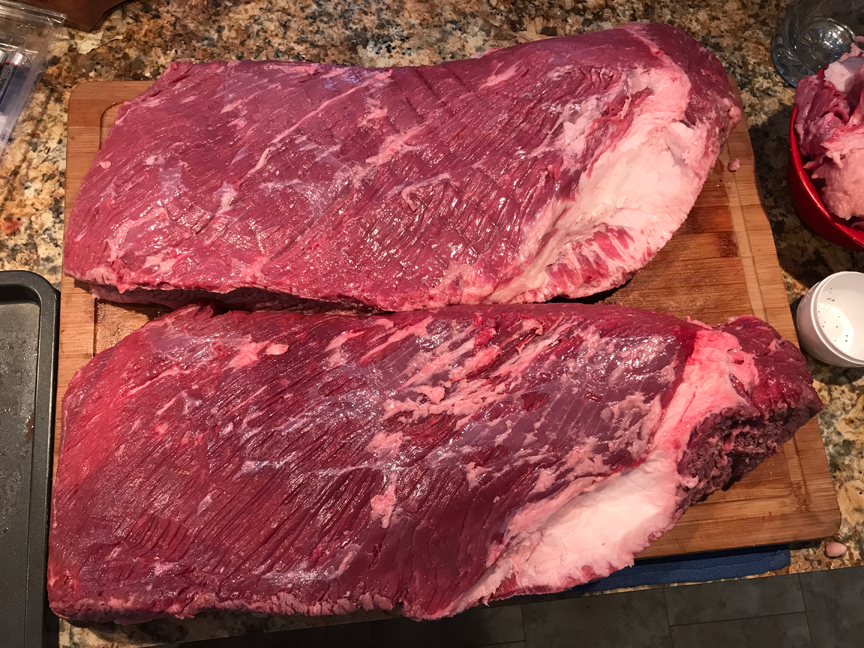 Then I prepped the rub - basic 50/50 salt pepper blend, but this time with some paprika tossed in the mix - maybe to get a little extra color, I don't know.

Then I did a little something I haven't done in a while -  Mustard smear! 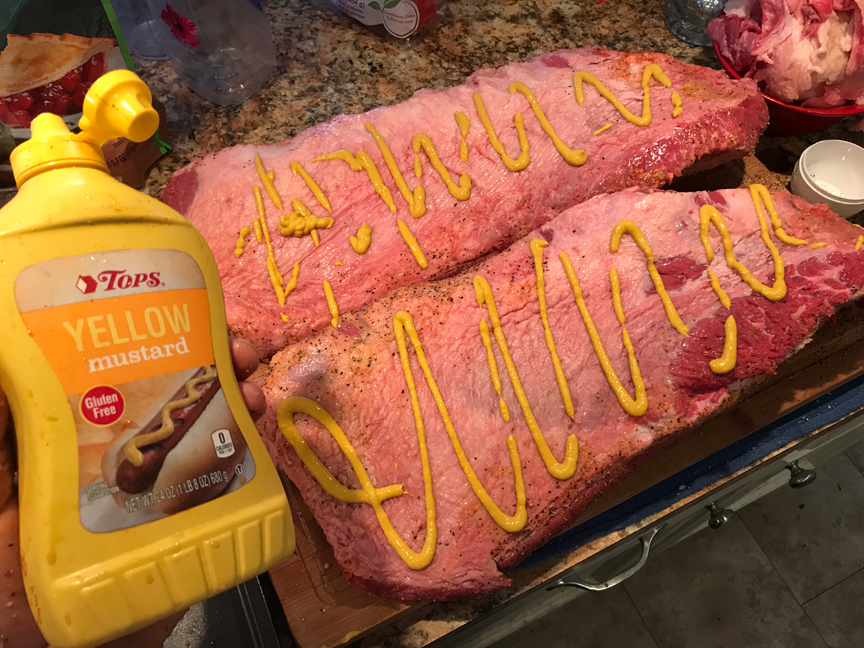 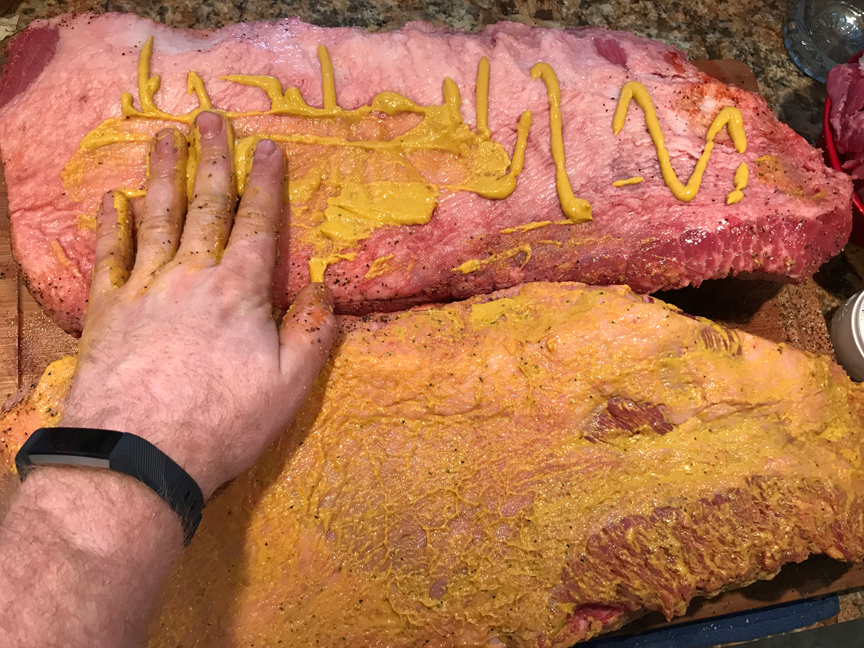 Why mustard? They say it helps the rub stick, they say the acid in the mustard helps do stuff, it apparently doesn't add flavor, but whatever - I felt pretty good about getting messy with the mustard!

and yeah, it helped the rub stick. Then It was a grueling 24 hours of cooking...

My digital bluetooth thermometer was fluctuating between 150 and 210..  but both of my analog gauges were right on the money at a little over 225... This eventually worked its way out - I'm guessing some steam from another project I used the probe for must have gotten in there and screwed things up.  Towards hour 15, the probe stabilized and started performing accurately..  still a few clicks away from the analog ones, but closer..  All this probe thing did was mess with me and make for a constant fear that I was going to botch the cook up.. which makes for an exhausting cook.

hour 18 is usually where I start trying to sleep-nap and cook at the same time, and that makes for an emotionally draining cook as well, but it's all part of cooking brisket, and the whole time you're wondering what the fuck you are doing.. and why..  Why haven't you invested in something more 'set it and forget it' why did you choose a smoker that required checking a fire and making adjustments. What's the gameplan for this hobby? why do we do this? why!    ohhh yeahh..  that's why.... 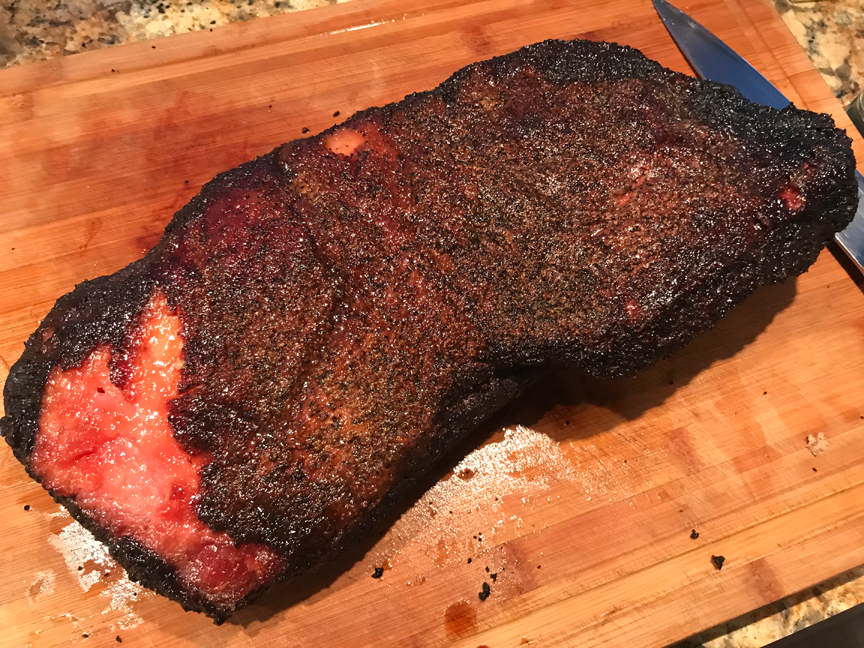 The peach paper ripped part of the bark off, but that's ok..  the first cut of the flat had some really good moisture in it - usually this piece is a piece of rock. 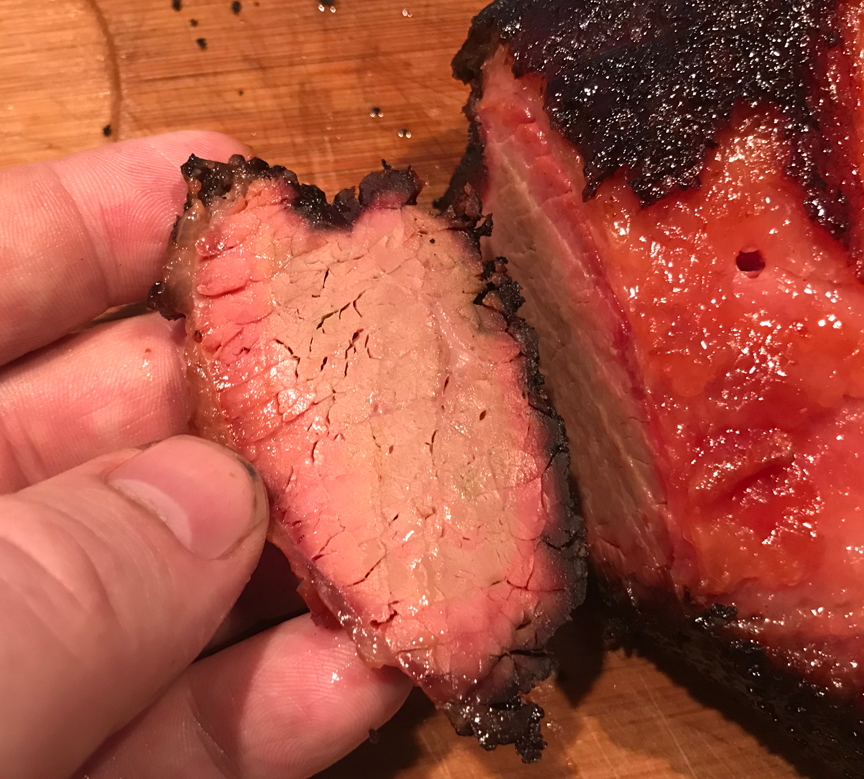 That's my first snack when cutting up a brisket. The absolute tip of the flat usually a great indicator as to how the cook went, because it's usually the driest part of the piece. If it's dry as hell I'll usually snack it up and then take another cut to see what's happening farther into the piece. Then I cut the whole piece in half and get the killer cross-section.  So glorious. 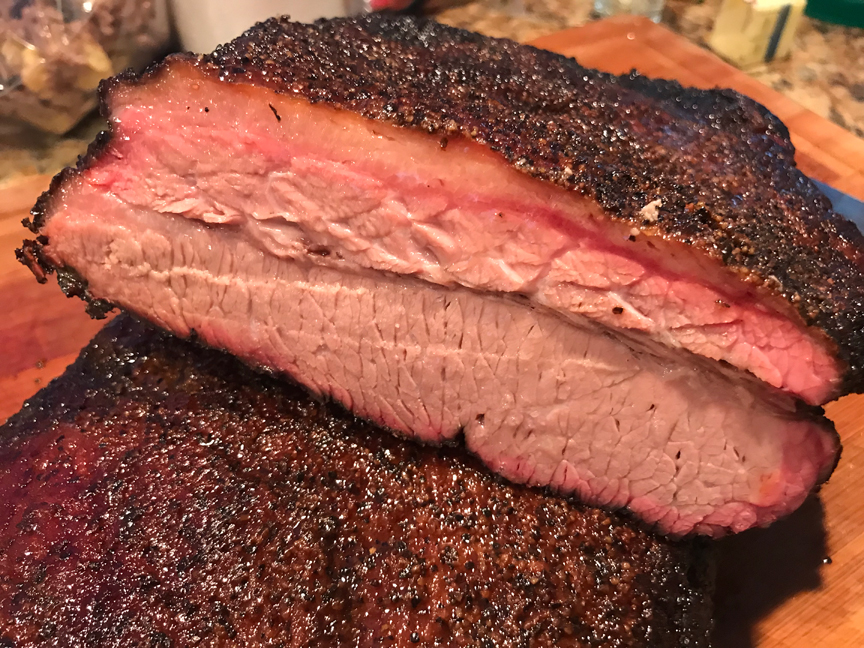 Killer smoke ring, tons of juice..  then I take a slice right out of the middle and snack it up hard. 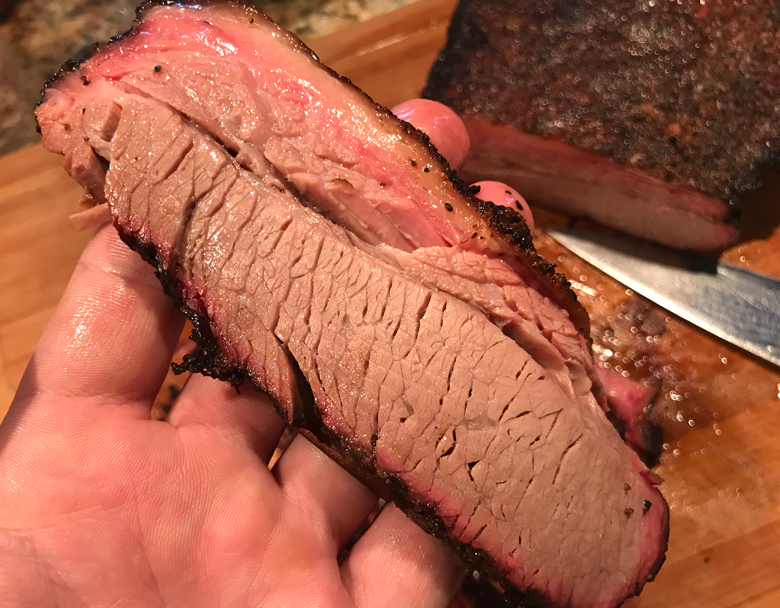 This piece was about as good as brisket gets - especially with my cooking arrangement...

Then because this was going to a picnic, it was time to slice! 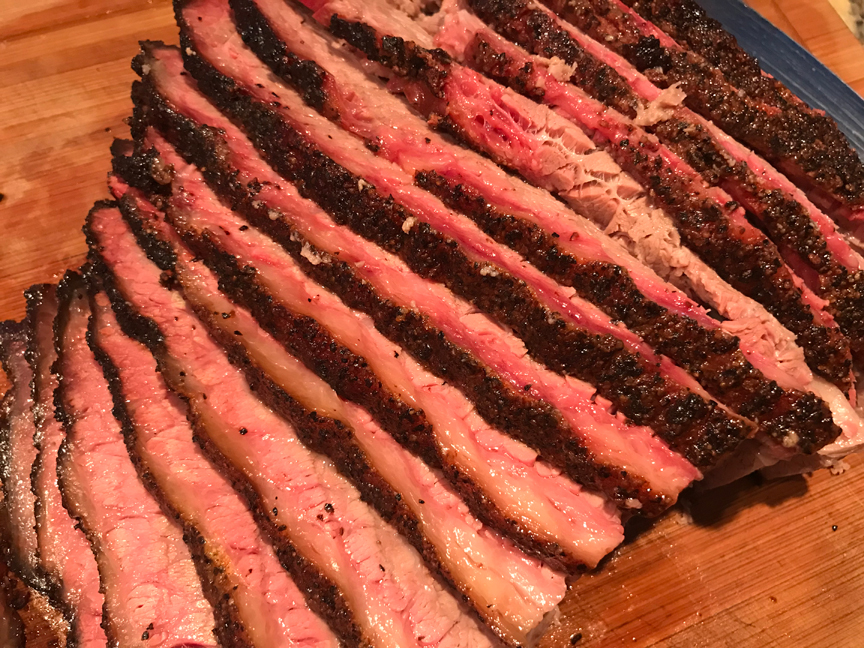 There's always the nice, uniform section of the point at the end that is just the most delicious part - so succulent.

I did the picnic the honor of putting all the 'lean' (flat) in one pan, and all the 'fatty' (point) in another pan.

The other brisket continued to cook for 2 more hours before getting near temp..  I was so happy to know that this was going to be just for me!

The picnic was great! 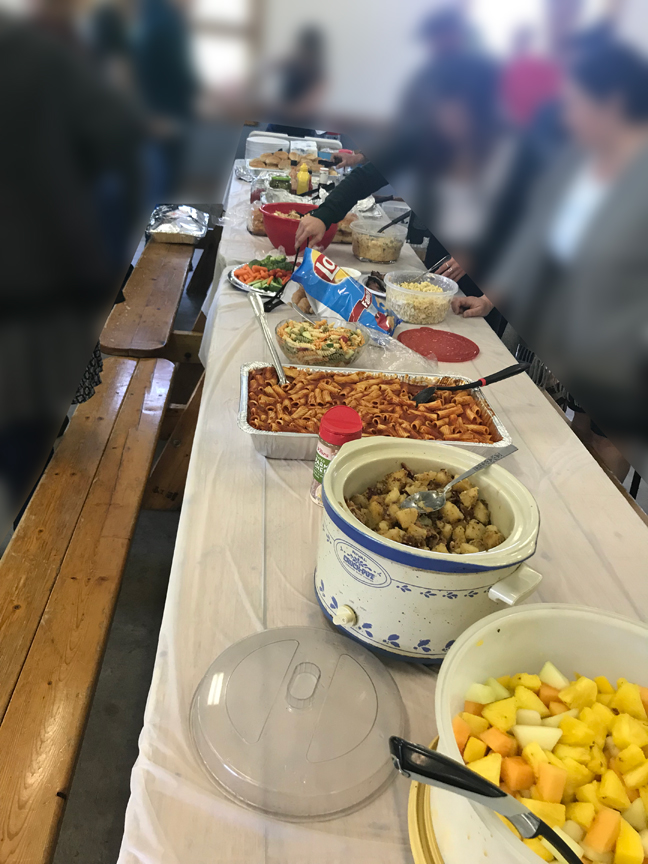 I guess my brisket was ok---

I think this was the most people that have eaten my brisket at once, and it's very intimidating. I always think that some people are going to think the fatty pieces are too fatty, and the lean pieces are too dry, and the fact that the pieces weren't piping hot and fresh had me very nervous.. But the feedback was great.

The best part?  aside from hooking people up with killer brisket...?

Another killer brisket hanging out at my house for me to snack on this week! 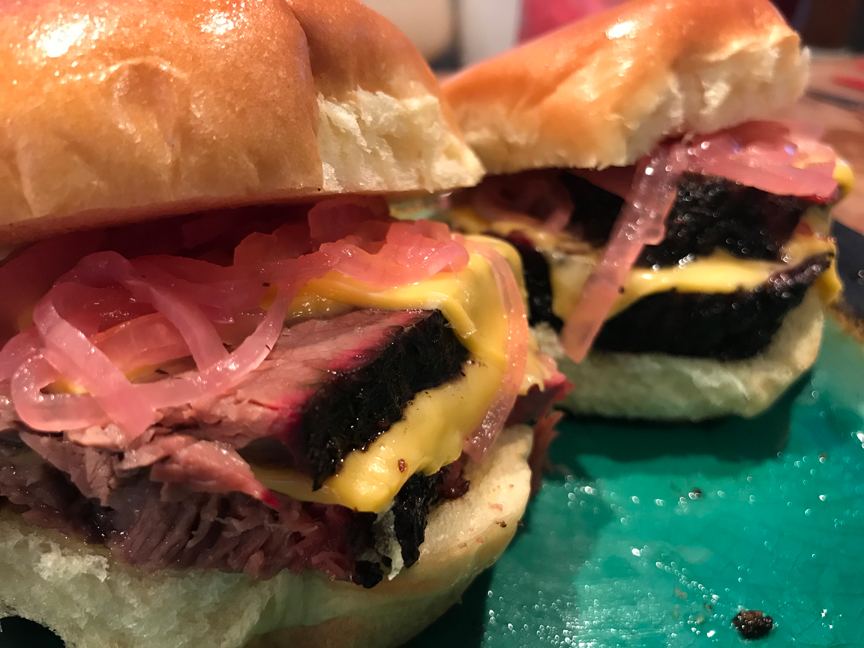 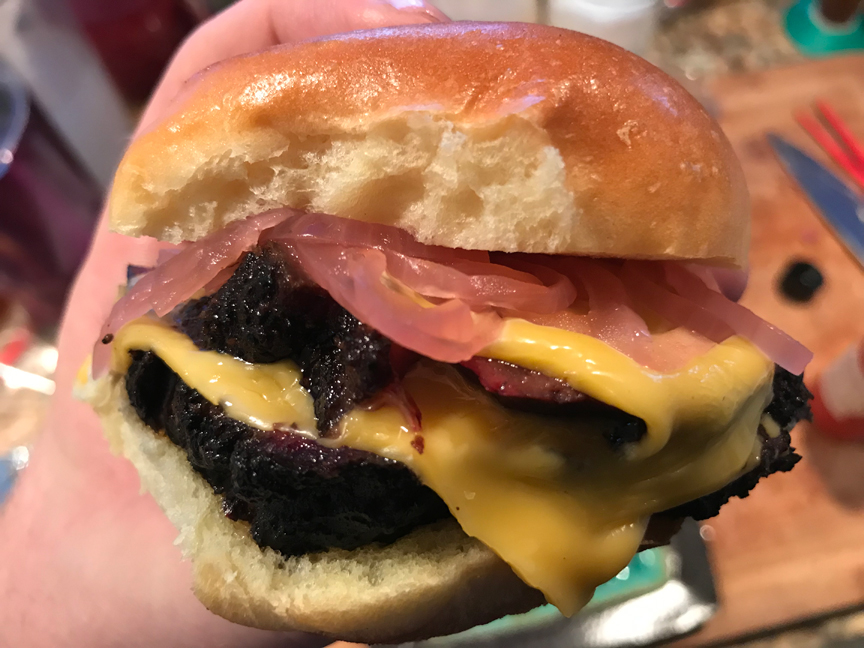