With all the talk about Resurgence opening their grand, second location in South Buffalo this past weekend, you'd think I would have been front and center for the ribbon cutting, and blogging about that as soon as possible!  Well, If you thought that, then you don't really know me that well! I like to let the buzz of a new location settle down a little bit before I go check it out.

What else happened this past weekend? Well, Father's day! My Father-in-law loves a good beer just about as much as I do - maybe more! So I made it my mission Friday night to hit as many places as I could to acquire crowlers to enjoy on Sunday. In the process, I tied one on pretty good gang, not going to lie!

First stop was Froth - Where I had a nice NIPA, and packed up a Crowler of their Mounds bar to go - one of my favorites from that place! Second stop was Resurgence, (the pic below was taken at a previous date, but still relevant) - I packed up a crowler of their Anniversary IPA which was super good! 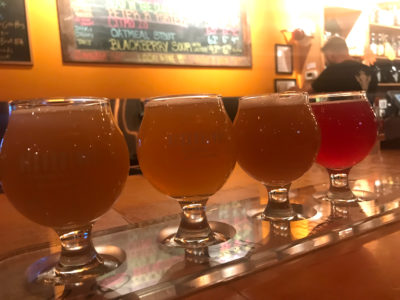 Then it was on to Thin-man Chandlerville for some flights and some hanging with my bud Chris - Taking a Crowler of their Brown ale with me. 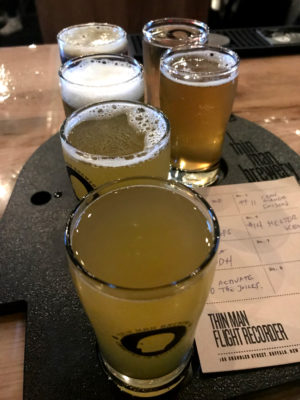 Then it was time for my 4th destination, which I had never been before: Prosper Brewing Co on Webster st. in North Tonawanda. I didn't know what to expect, but I was really starting to feel super by the time I got there!

The place is small, but it felt good in there! The folks behind the bar greeted us with smiles and immediately made us feel welcome. I took a look at the beer list, and knew I couldn't agree on just one, so a flight it was! It was kind of exciting to see a menu with some very traditional brews being named. A lot of places are really pushing the boundaries with what beer is lately; sours are almost as common as IPAs were 3-5 years ago. Beers heavily flavored with fruits and odd spices are running rampant! I don't have a problem with that at all - believe me - but it was almost a relief to see some old, tried and true traditional beer styles being named on this list. 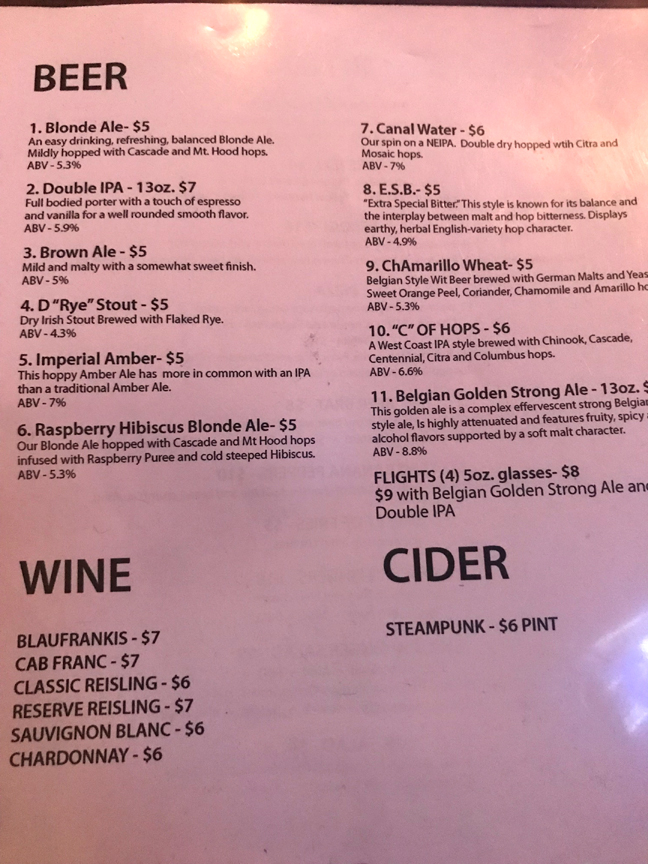 Ok so 'Raspberry Hibiscus' isn't technically a 'traditional' beer, you're right - but most of the beers on the list are, I promise! The E.S.B - Extra Special Bitter is my buddy Neal's House beer - a super drinkable, and super balanced beer with a great finish. Brown ale, blonde ale, double ipa - no crazy wild names... This is a brewery that is just trying for perfection, which is commendable, and something I can tell just by looking at this list before even trying the beer! 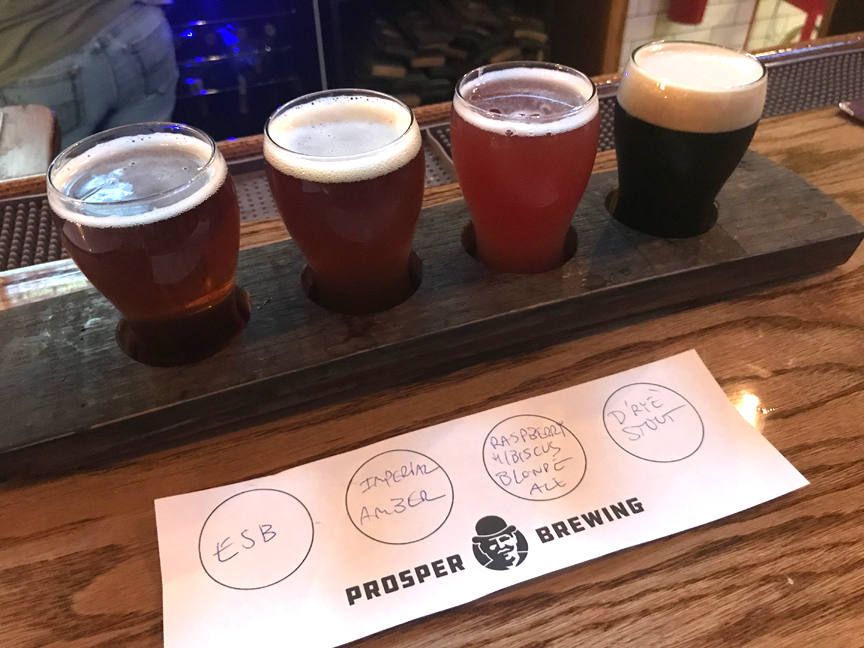 I will admit, that the Raspberry Hibiscus Blonde is something very special - but you don't get to that level of special without being able to nail a blonde ale recipe like a master. The others? equally as delicious - I sincerely cannot wait to get back in there and try more and to make sure that being tipsy didn't have something to do with me liking everything. 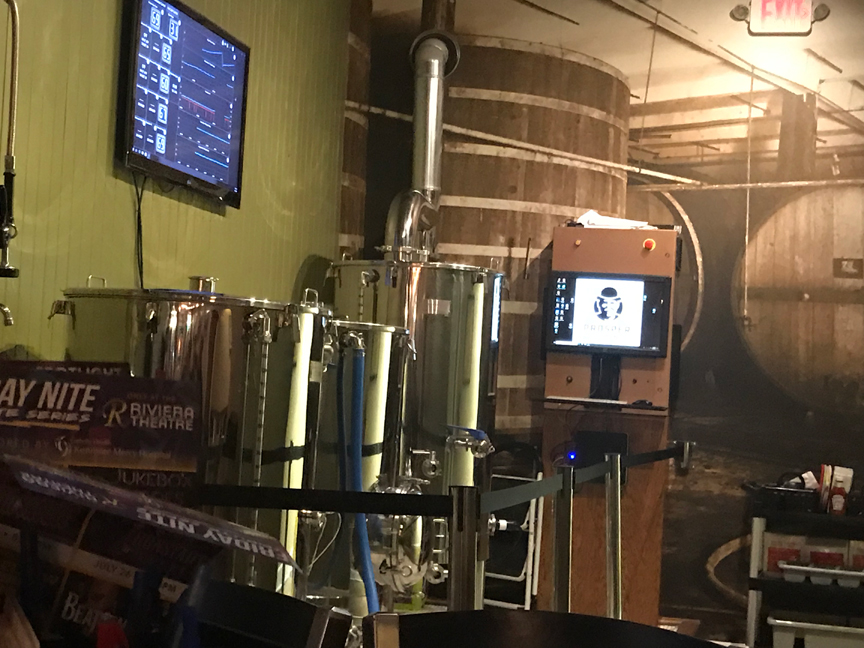 Let me get up and take a look at this thing! 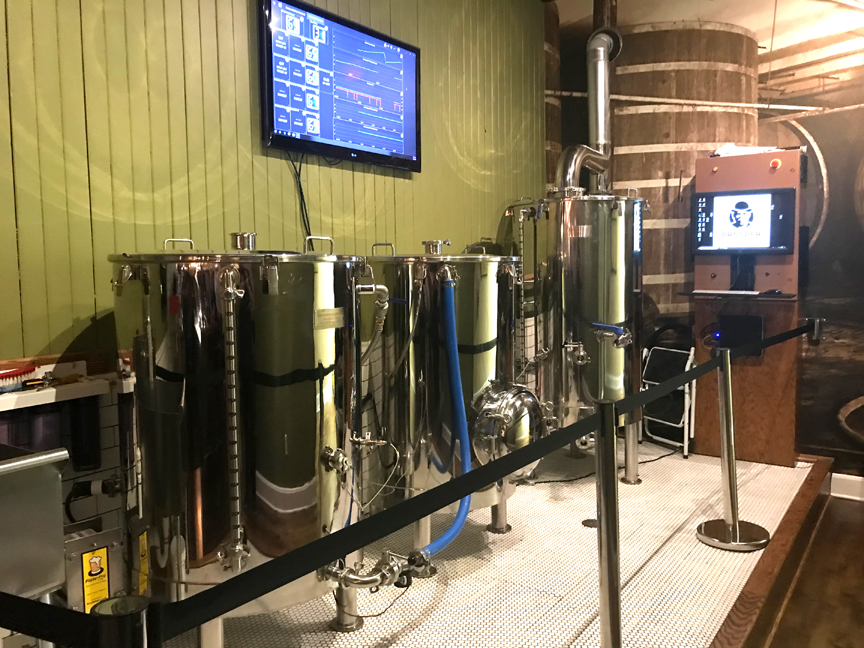 That, my friends, is where all this killer beer is coming from - a 3-barrel (maybe?) system right in the corner behind the ropes!

Towards the end of my flight, I managed to strike up a conversation with the folks behind the bar - one of whom was Kevin Whipple, one of the owners. Once he caught wind that I was into brewing myself, rather than shrug it off and keep going about his business, he began to engage me about my hobby and talk passionately about the ingredients and ideas that go into some of his beers. He actually listened to me when I talked about my upcoming projects, and told me about the history and motivation behind the brewery's name and location. Very cool guy - I hope I didn't come across as just another drunk guy with a big beard!

Highly recommend checking out this brewery. Super good beer, super nice people, a little bit of a drive from other locations, but if you plan your trip out right, you can stop at a few other great places on the way! (plus woodcock is kind of around the corner too!)

You can find tons of better pictures of the place here at Step out Buffalo.

And they also serve food!  But we were too late to try it.

So we drove back towards our neck of the woods, and threw a beating on some food at Mooney's!

Try new beer people -! That's what this 'love for beer' is all about! New flavors, good and bad -  Get out there and try to engage the people serving this stuff to you - get the story, get the information - There's still breweries I haven't even been to in Buffalo yet! I'm coming for you!