That's right, I went into Dash's to just kind of take a look at the meat counter, and dang-it..  I bought a Prime Cut Porterhouse. 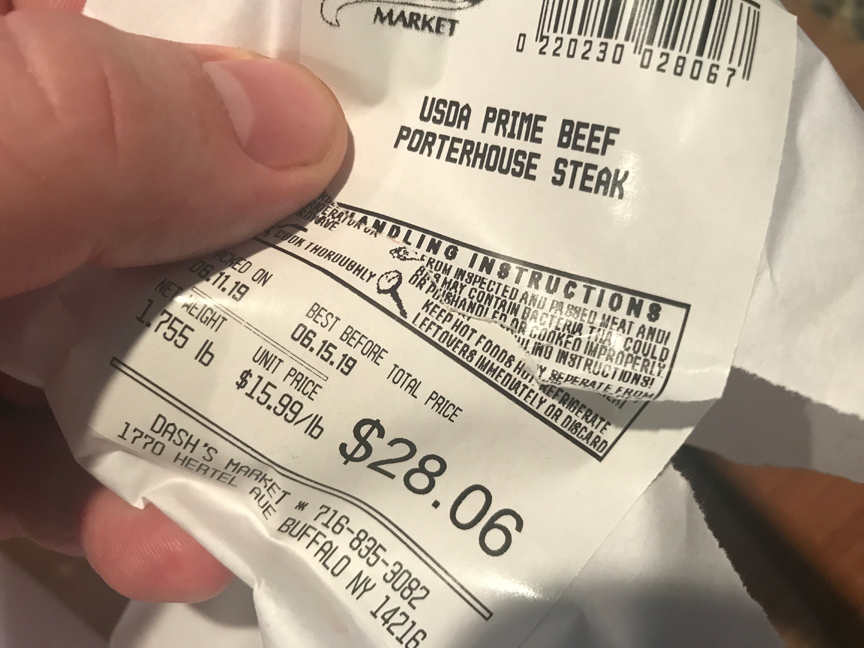 I know I've probably went over this before..  but here's how I love to cook my big steaks that I don't want to screw up.

First thing's first - let's get a good look at this thing! Look at the MARBLING! 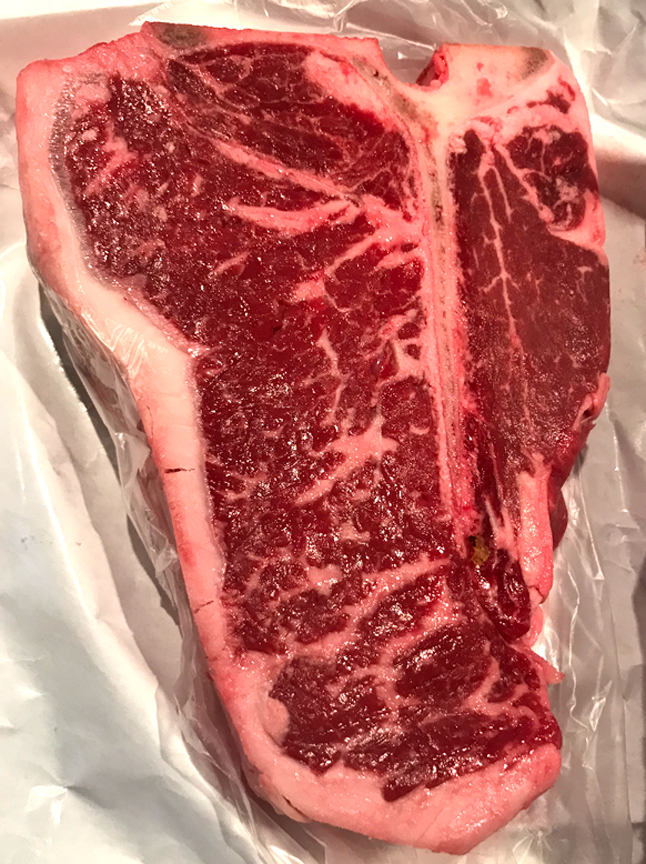 And ok, they left a nice fat cap of fat along the edge.. that might be how they get away with selling prime cuts for $15/lb..  Time for the magic - just salt and pepper and lots of it!

Then it's into the vacuum bag before going into the sous vide! 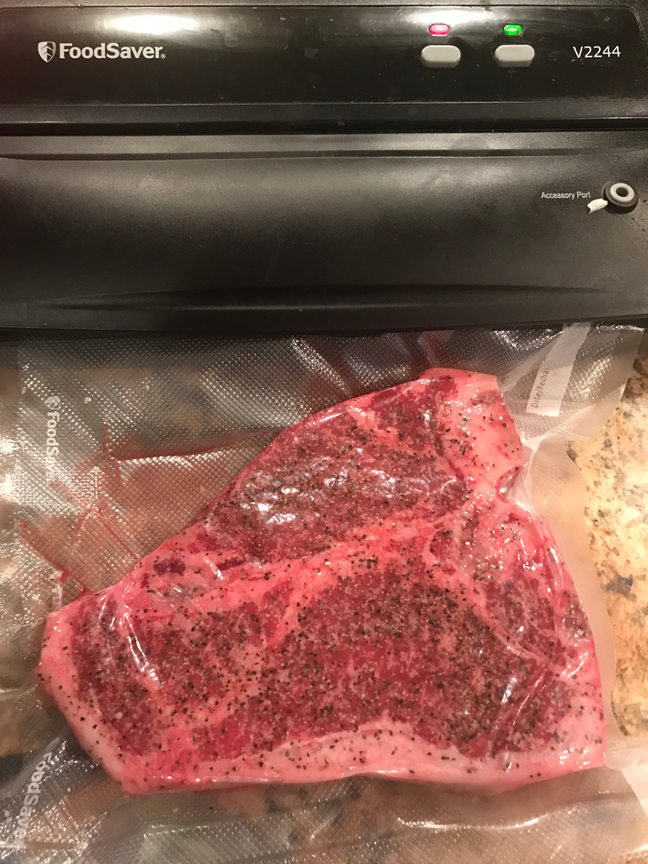 Oh MAN Looking good - time for a bath!  going at 129 for about 2.5 hours - I like to do big cuts for longer than the basic size steaks - especially with a bone.. I guess I do it just for added TLC factor..  and to make sure that every part reaches the temp I want. 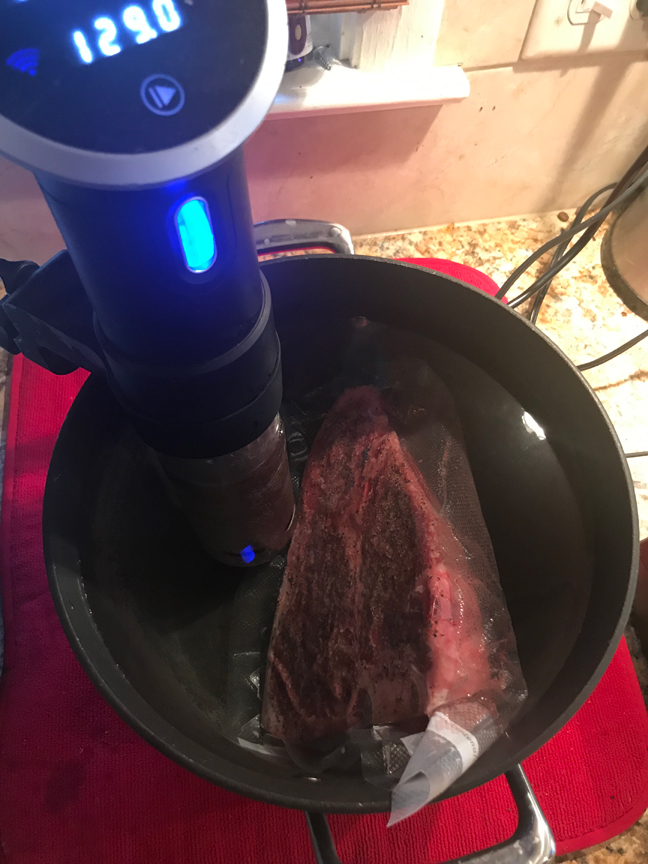 Cut it free and dry it out on some paper towels!

Once dried out, we cover it with a light coat of olive oil.

IT'S READY FOR THE GRILL! 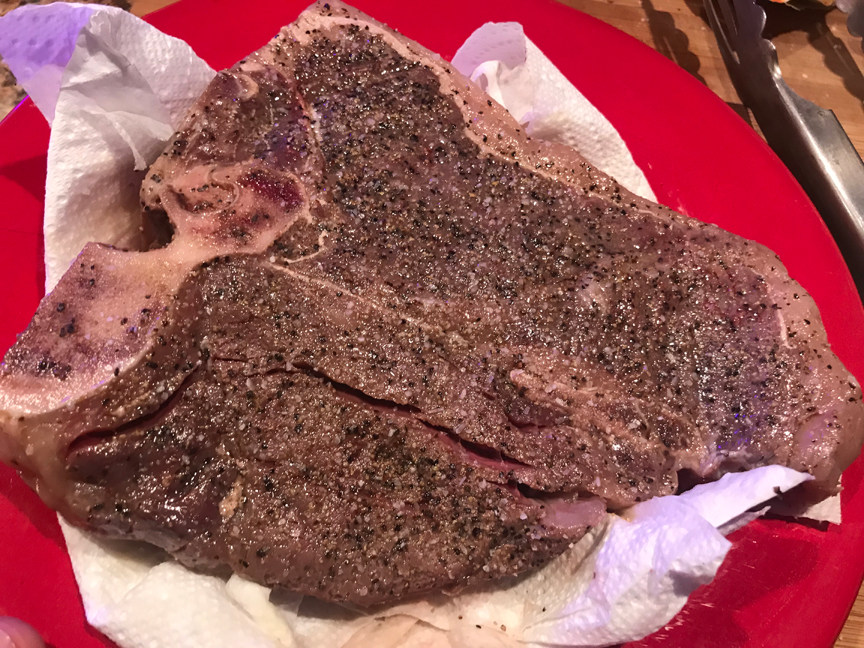 I get a hot serious fire going. 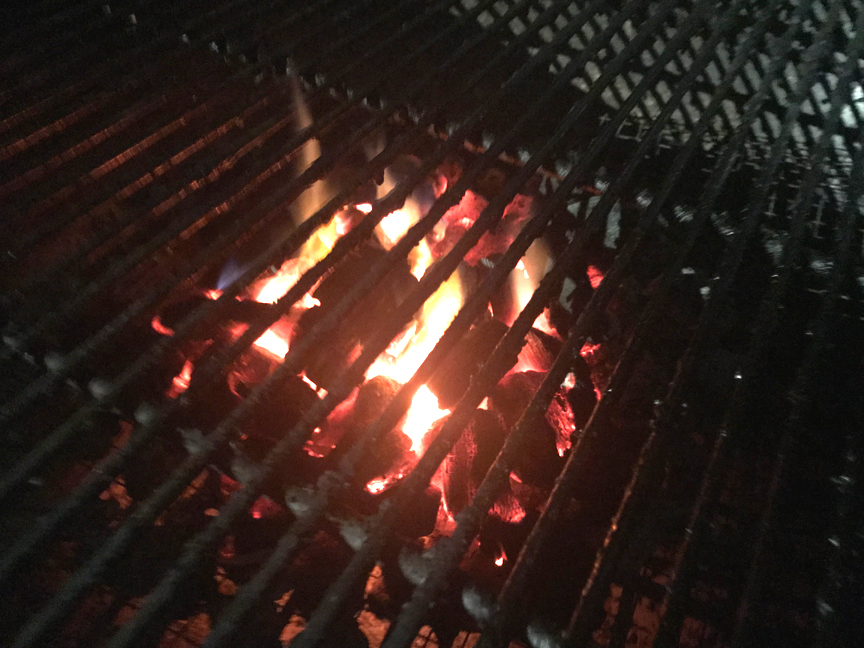 Because the steak is already cooked to the perfect temp, it's all about getting that crust on the outside, so I do 45 seconds, turn it 90 degrees, 45 more seconds, flip and repeat - that's it. Turning it 90 degrees in the middle of the cook is what gives it the criss-cross grill marks - not that hard.

The fire was really starting to kick up by the end of the cook, so I took advantage of it, and used it to take down and render out some of that fat cap on the side. Not only that, but it felt super bad-ass to hold the steak and have the flames leap up out of the grill. course, I was only by myself, but a small part of me hoped that my neighbor looked outside while I was doing this, and 1 - thought that it was super bad-ass, and 2 - that I grill way more than he does, and that he should really grill more. 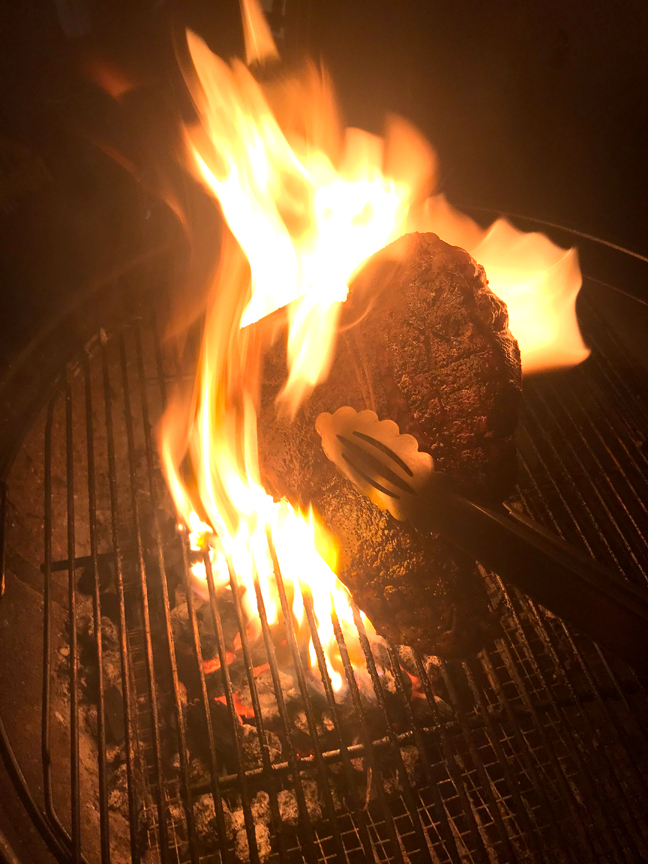 Back into the house. And the tenderloin goes to my wife, and I get the rest!  served it up with some oven-roasted Delicata squash! 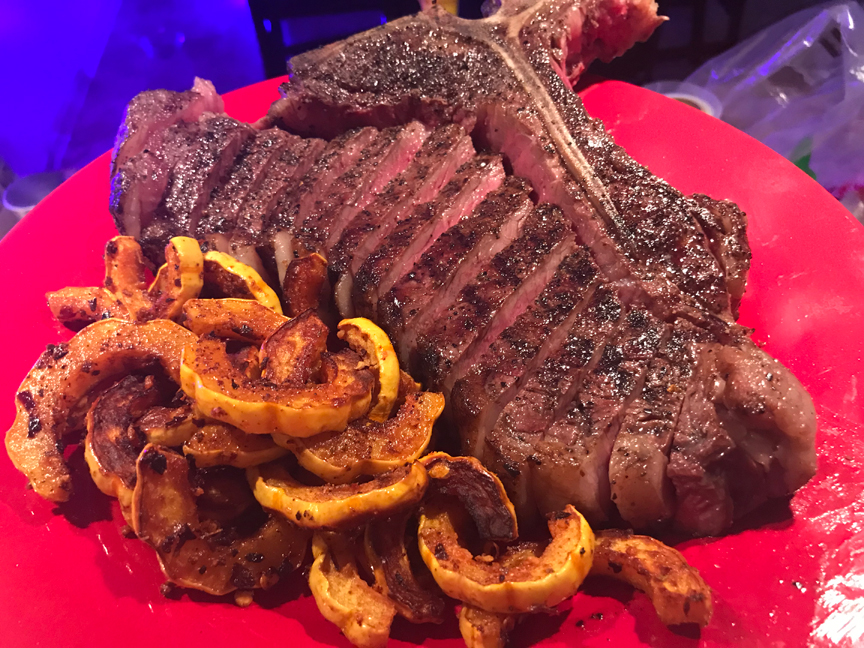 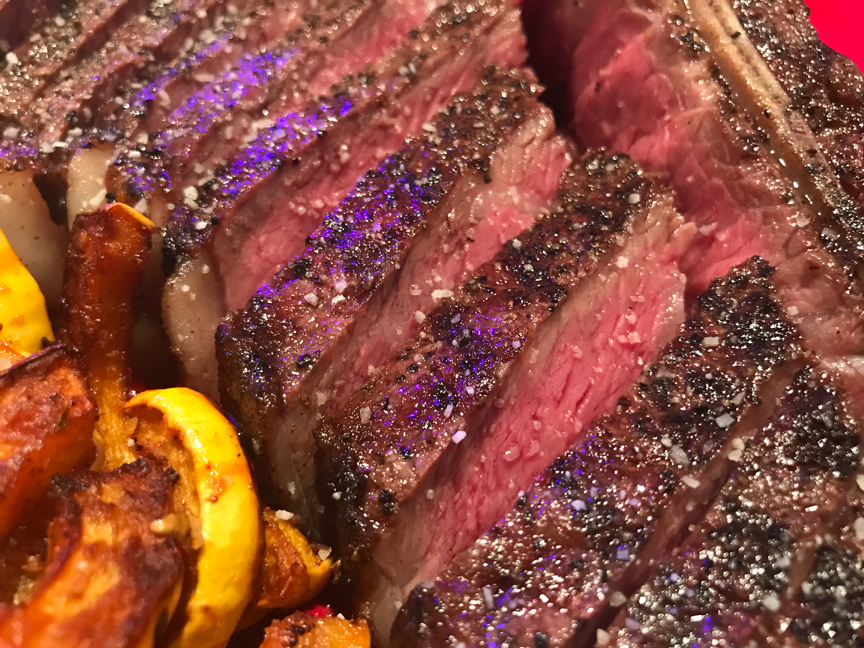 And it's perfectly cooked! -  for me anyways.  little too rare for my wife, but she was able to heat her piece up a little more and enjoyed it. 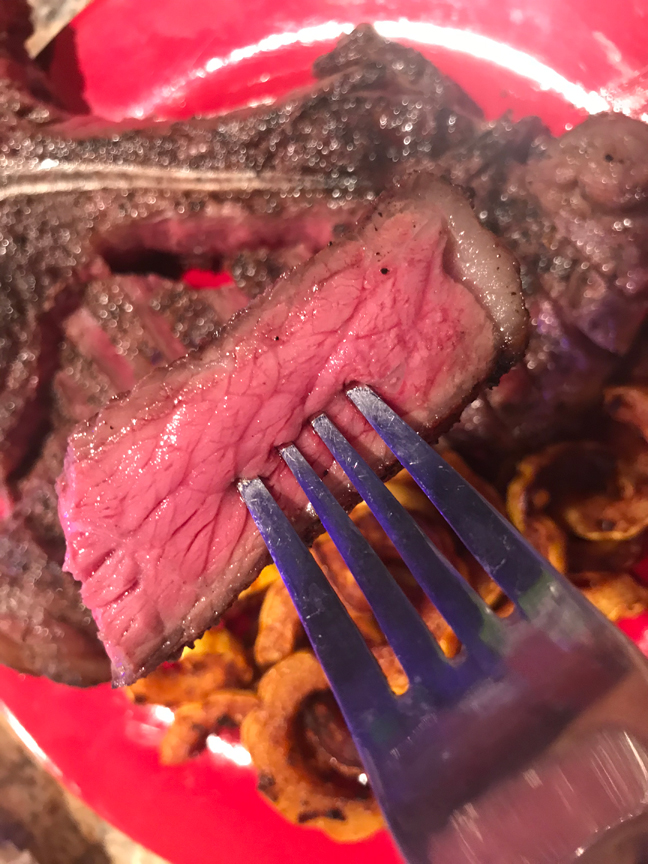