Father's Day went down and my wife decided that we would host a 2-dad blastoff at our house. This meant firing up the outdoor cooking devices. She compiled the menu and called for Shiskabobs. I don't really do shishkabobs, because I prefer larger cuts of meats rather than pre-cubed ones. Nevertheless I accepted the challenge, and made it my mission to put together a killer spread of skewered meats!

The mrs wanted chicken, but wanted it pounded flat, marinated in Chiavetta's. Chiavetta's is a great vinegar based marinade that is a WNY favorite, and I highly recommend you try it if you haven't. I'm not sure of its availability nationwide, but you can always get it shipped in from Buffalofoods.com. So not having to worry about Chicken Shiskabobs, I decided on 4 other proteins that would make great skewered meats: 48 hour chuck, venison back strap, pork tenderloin and bacon wrapped shrimp! This would be accompanied with grilled peppers and onions, including extra large sweet onions, slow cooked!

First the shrimp - I par-cooked the bacon via sous vide right in the original packaging (yes you can do that) for 2 hours at 129 with the venison back strap as a way to render out some of the fat. The last thing you want is fatty bacon on overcooked shrimp, a little par-cooking helps even the playing field! 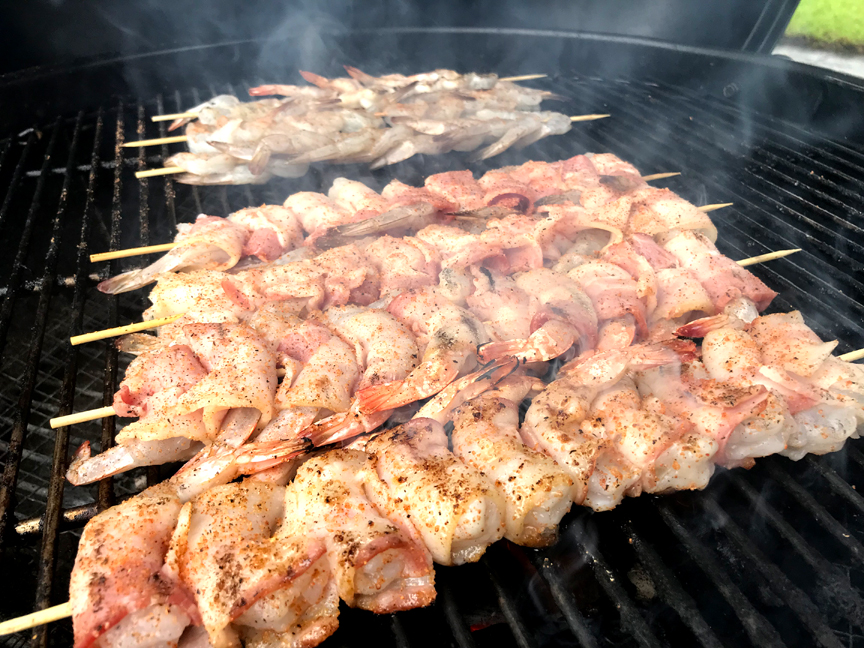 The tails kind of burned up a little, but they can take a little char and not fall apart. these actually ended up pretty damn good! I would have totally hit them with bbq sauce at the final 30 seconds, but I was trying to keep the sugar down because there were some carb-concsious folks eating at the place. The shrimp went inside, and I prepared to cook my skewered meats!  I was doing all of this on my 27" weber kettle charcoal grill, but there was no way I was going to cook everything at once. To solve this issue, I actually fired up my 22.5" Weber Smokey mountain to serve as a charcoal fueled oven to keep things warm while I cooked. I took advantage of this secondary cooking zone and threw some 'grillin' beans and some big slabs of onion in there too! (pre-grilled on the kettle)

Now it was time for the skewers - I started with the mushrooms and the pork tenderloin. I brushed chiavetta's on the mushrooms as they cooked, and I didn't sous vide the pork, so I knew they were going to take a while.

But wait - all this real estate, why not get some more stuff on there! 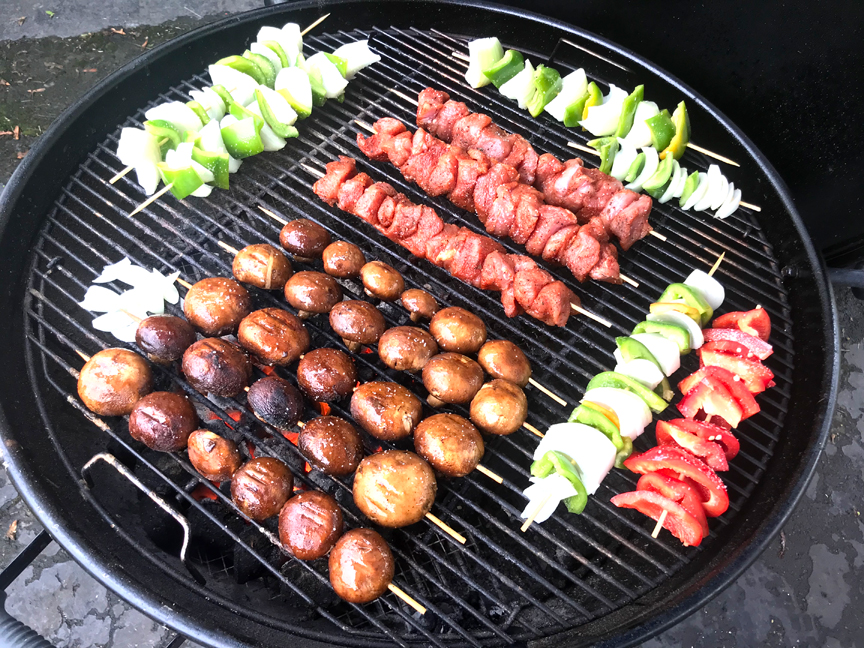 Ah, yes! that's why I got the biggest one I could - so worth it! As the veggies, pork and mushrooms all got a nice browning, they went into the smoker to stay warm and cook a little longer. Then it was time for the main event - venison and the 48 hour chuck roast! I love cooking chuck steak super slow with the aid of sous vide. I used to think 145 was the magic number, but I think 140 is my magic number now. It simply turns your bargain rate $3.49/lb chuck roast into a texture that is almost identical to that special flap along the top of a rib-eye that you save for last - so tasty. please try this. The venison backstrap (super tender cut) I rubbed with a pampered chef jerk spice rub that I really liked, then at the tail end of the chuck cook, I turned the waterbath down to 129 to keep the venison on the rare side. Then they got seared on the grill.

I love these metal skewers my family bought for me a long time ago - they probably think I lost them, but I hung on to them - and they are great. Kind of a bummer that I didn't get to spend father's day with my actual father. I definitely miss him - but that's all part of the deal when you and your family don't live in the same states. But these bad boys were a nice little reminder that they're the best!

Once these were good to go, It was time to party!

I also made some bacon onion jam! (you can find the recipe in this very entertaining video from Matty Matheson) Tons of flavor, just a great thing to have on the side - can make pretty much anything taste amazing, and take a grilled item to cloud 10 (from cloud 9). 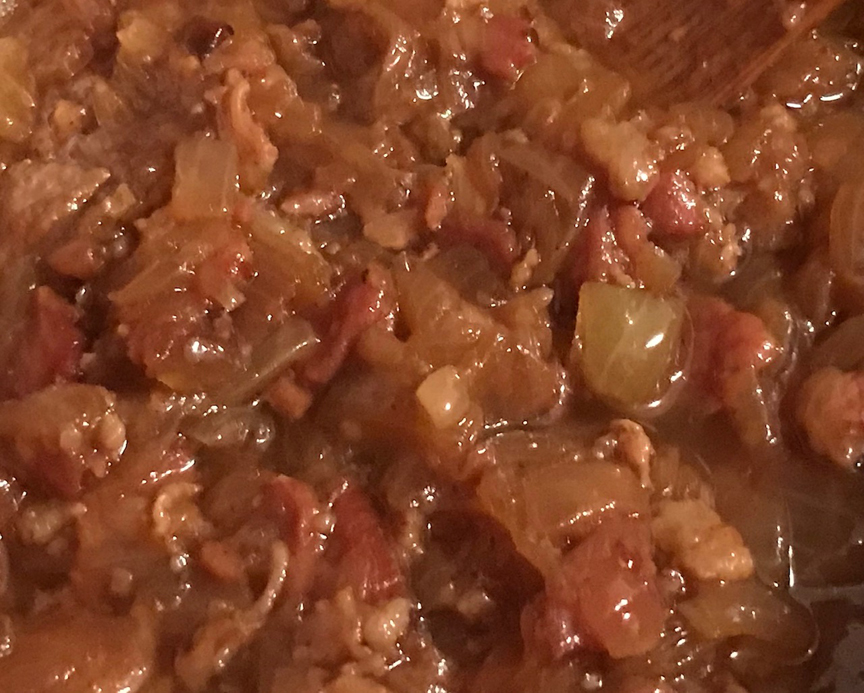 The mrs got crafty too! we made a 'grilled bacon vinegarette potato salad' I grilled the potatoes, she dressed them - very good!  (whole seed mustard in full effect with this one!)

Then she made a faux potato salad using cauliflower that we steamed in a big bamboo steamer - very delicious as well.

She also made a salad that no one took a picture of! sorry hun!

Look at this plate - isn't this the most comfort food blasterooni you've seen today ??  If you're a 'my food can't touch' kind of person, I would guess not..  but this was just delicious food - all of it - we nailed it!! 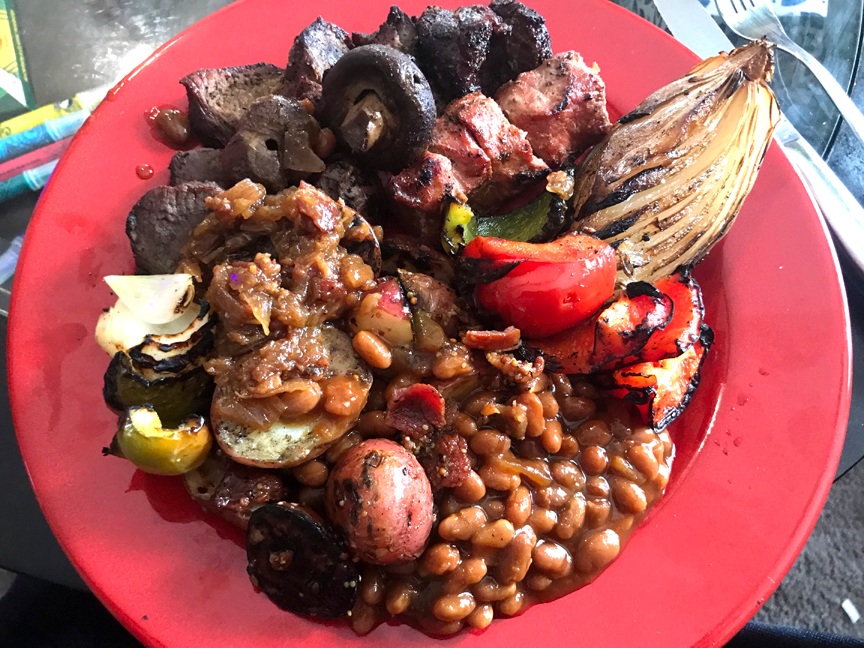 Then it was time for dessert!  Killer Key lime pie made by my mother inlaw - I don't know how she gets it so tart, but I love it! 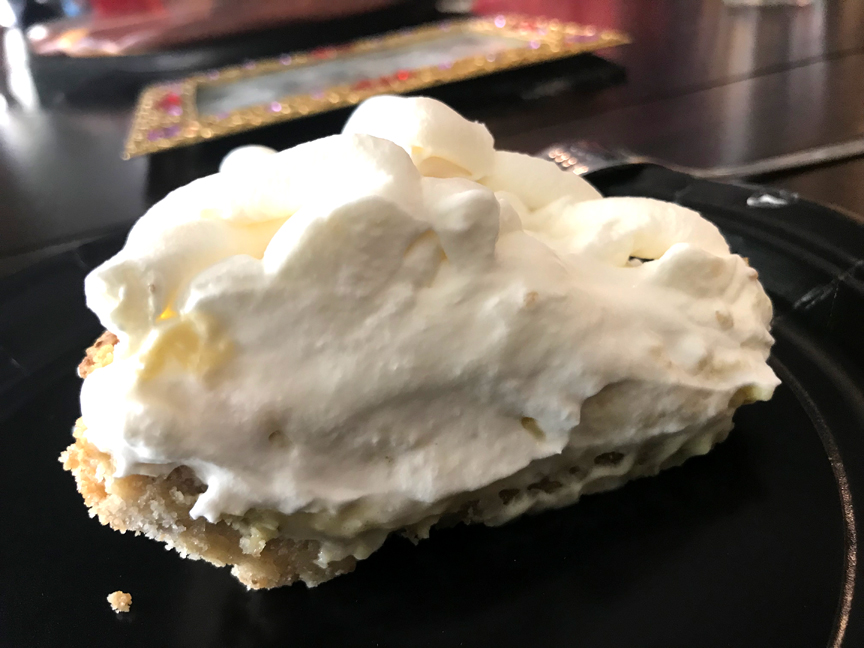 My sister in-law came through with the mini-eclairs too. So good! I could eat them like a bowl of popcorn! (and I may have)

It was a great day - we drank all the beer I talked about in my last post, we talked about all sorts of stuff. Hosting can be difficult, especially when you're trying to pull out all the stops and give your guests an experience they aren't expecting. 5 different proteins in one meal was a serious challenge for me, and I couldn't have done it without having 'more grills than I know what to do with'.  So when your significant other, with a grilling hobby (problem) thinks of wanting an additional grill for the backyard - hear them out, and think of me - because having two cookers really saved the day on Father's day!