So I went to NYC recently - more to come on that, but I want to get right into the nitty gritty. Before leaving, we stopped at Katz's Delicatessen and snapped up huuuuge sandwiches that we took home. This thing was massive, and delicious the pastrami was super tender and possibly the best I've ever had. Having recently attempted a batch of pastrami (not super successful) I decided to look online to see if there was a copycat recipe.

I found this one: http://wildflourskitchen.com/2016/06/14/homemade-pastrami-just-like-katzs-new-york-deli/

If you want the recipe, go ahead and check out the link above. Here is my documentation of my attempt.

First off, they say it takes 4 days to do the recipe if you're using a store-bought pre-brined corned beef. I managed to snap up a couple points on sale from save-a-lot for $2.99 a lb, so I was ok with experimenting with them. The first step is to 'desalinate' the meat by soaking it overnight in the fridge in a pot of cold water. Ok - done - one day down. 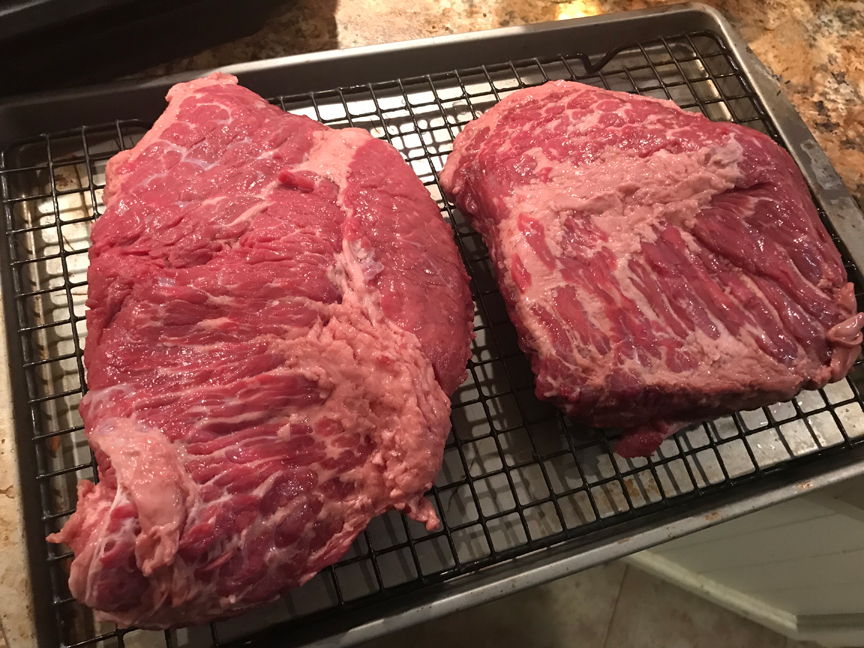 Next you assemble the rub- which doesn't have a ton of ingredients..  but some you might not have on hand.

I did not have pre-ground pepper, so I had to grind 4 tablespoons BY HAND!

Here's the rub before mixing: 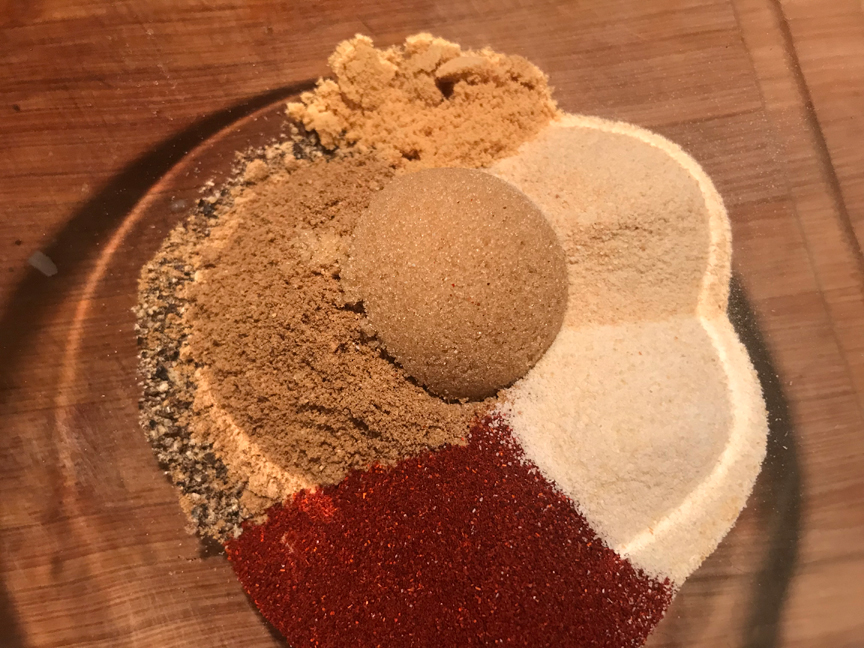 Here's the rub applied to my MEATS!

Then they go into the fridge overnight so the herbs can permeate the meat and who knows what else.
Here they are the next day. You can see some of the moisture from the meat has worked its way into the spices, and a serious bond has been formed! 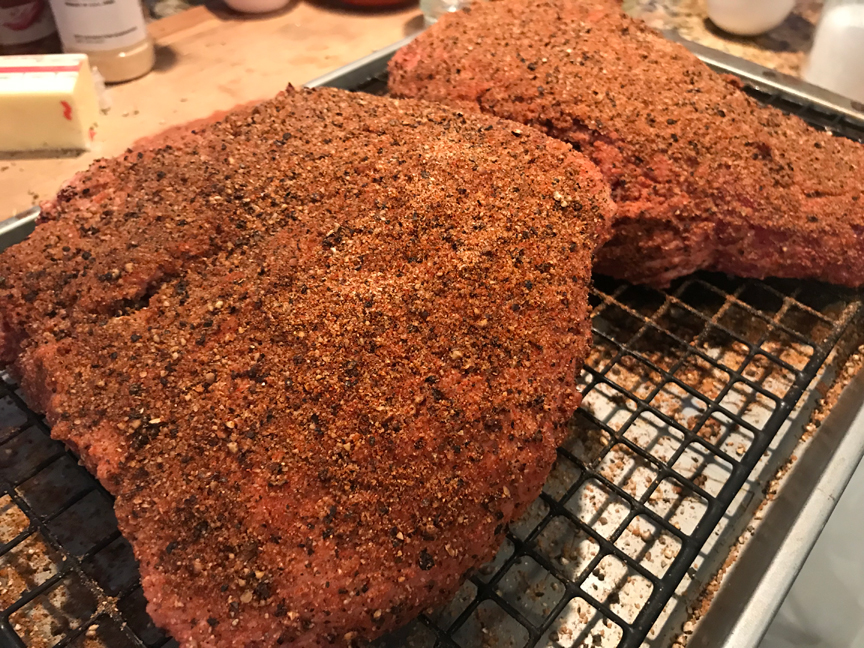 Now it's time to transfer to the smoker, where we go at 225 until the internal temp reaches 190-195ish.
I used my iGrill probes, because that's what's up.  an ambient probe (red) and a probe for each meat (black) The smoker was acting up, so it took a lot longer than I wanted to. but slow and sure.. 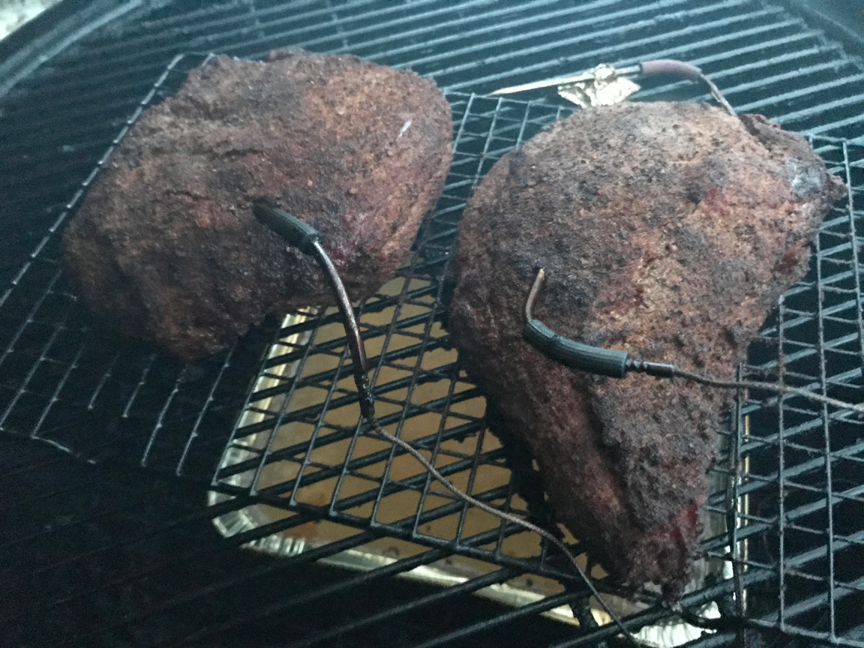 Looking good-  then they go into the fridge for everything to settle before being steamed the next day. 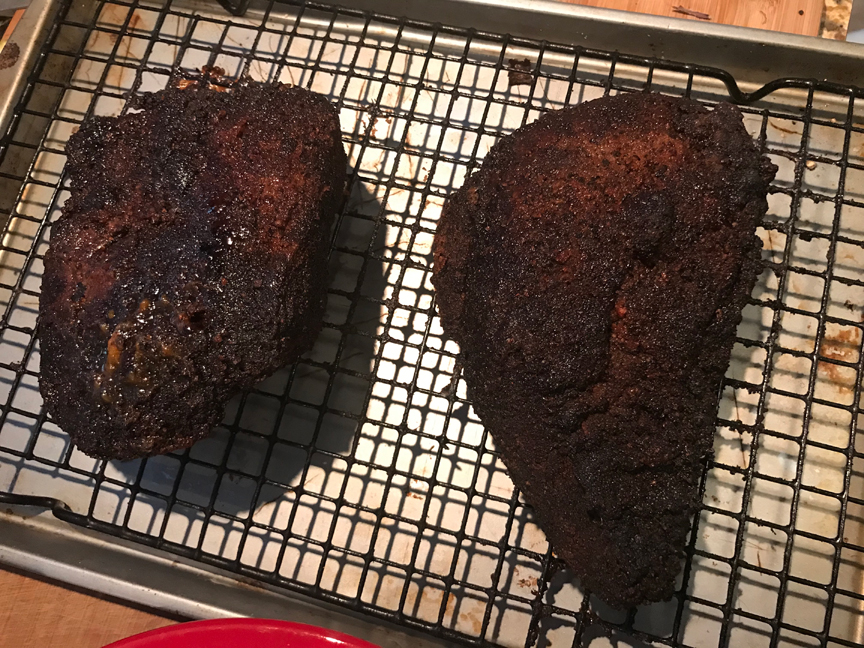 I didn't have an official steaming device, so I just got crafty with some aluminum products.
Yes, this is a bunch of aluminum foil snakes in the bottom of an aluminum pan.

And of course the probes went back in, to monitor the steaming process to get things up to 203.

And here we go - steamed...  so much for that amazing crust I worked so hard to achieve...  but trust the process, right? 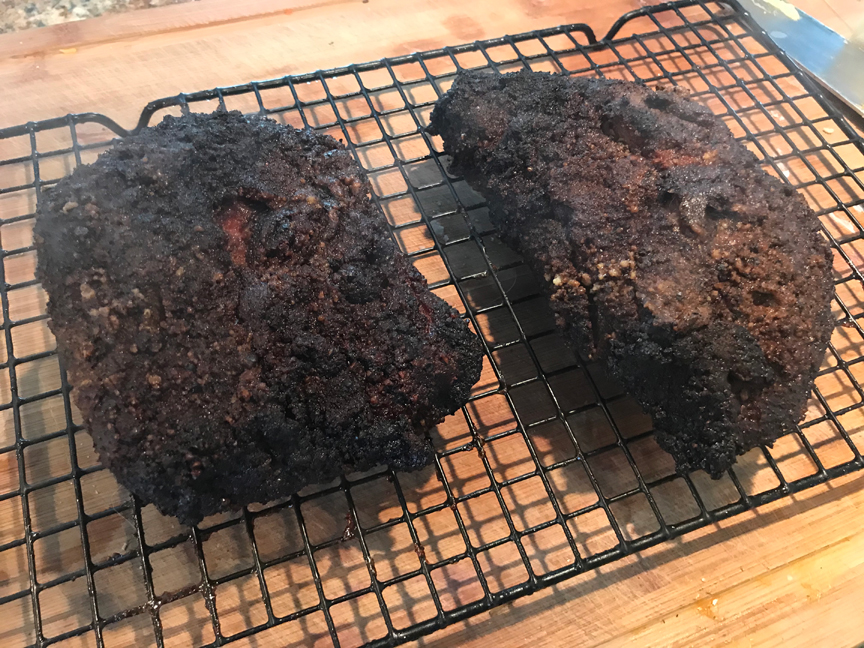 Ok, time to take a snitzel for all the effort.
Wow - look at that action: 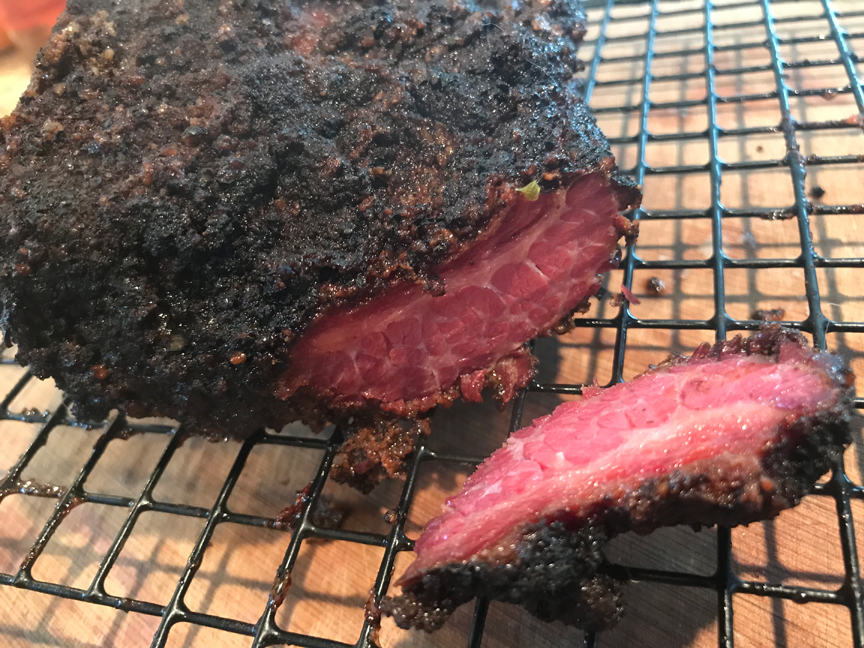 Ok, maybe another one..

Wow, that is tasty!
I took it over to my friend's house to enjoy as a pre easter dinner snack.   (after squirreling away some extra slices for sandwiches the next day) 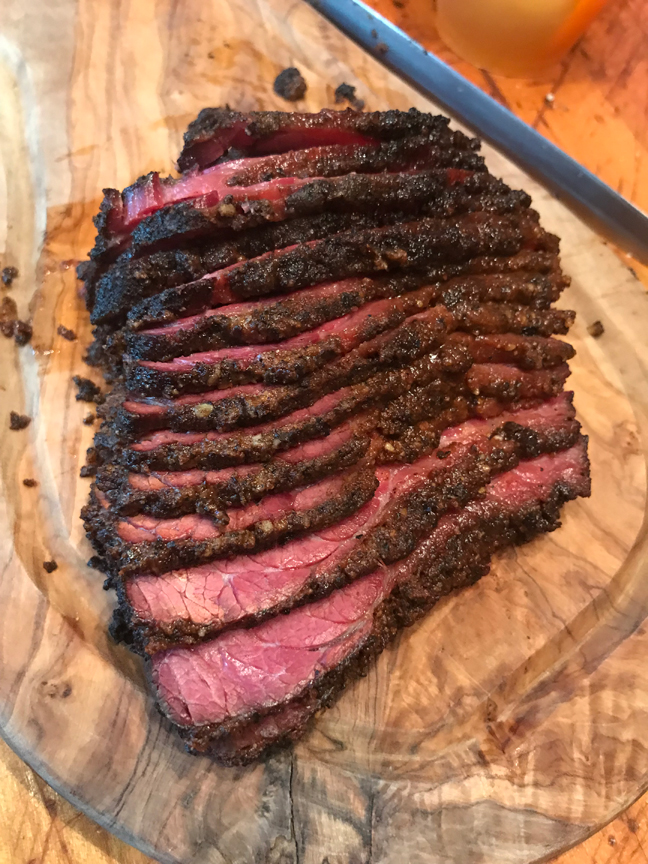 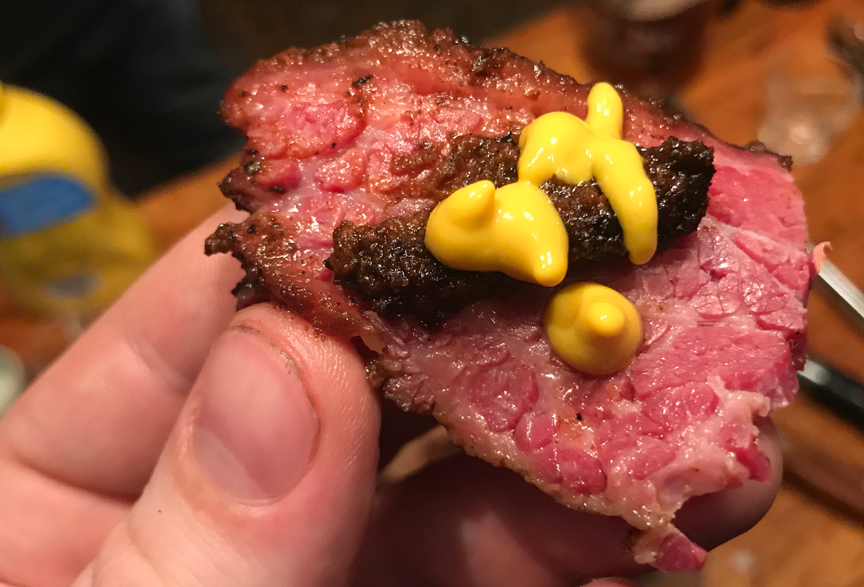 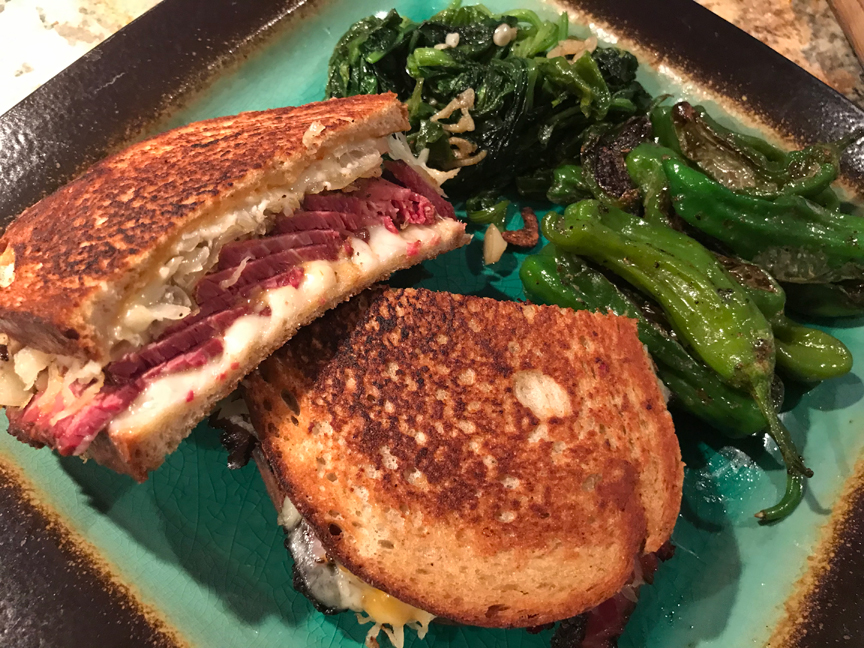 So how does it measure up to Katz's? Well, flavor-wise it was pretty good! texture wise, I ruined the bark by doing the steaming step. If I were to do this recipe again, I would eliminate the steaming stage and just smoke the thing til it hit 203, wrap it and stick it in a cooler for 1.5 hours or so.
I would also absolutely use a much larger piece of meat, the smaller pieces are good, but they just go so quick!
The pastrami on my sandwich from Katz's definitely had a bark on it. I know to some people, bark can appear like it's burnt, but it's totally concentrated smoke and rub flavor, and it's super good. So definitely smoking until the end next time.